Diverticula are pockets that develop in the colon wall, usually in the sigmoid or left colon, but may involve the entire colon. These small pouches bulge outward through weak spots in the colon wall. Each pouch is called a diverticulum. Multiple pouches are called diverticula. The condition of having diverticula is called diverticulosis. About 10 percent of Americans older than 40 have diverticulosis. The condition becomes more common as people age. It affects about 50% of Americans by age 60, and nearly 100% by age 80. 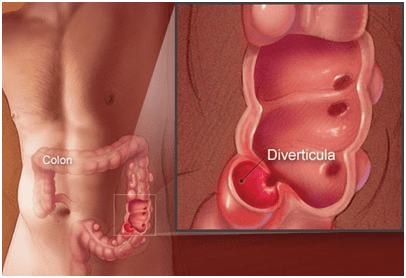 Diverticula are most common in the lower portion of the large intestine, called the sigmoid colon. When the pouches become inflamed, the condition is called diverticulitis. Ten to 25 percent of people with diverticulosis get diverticulitis. 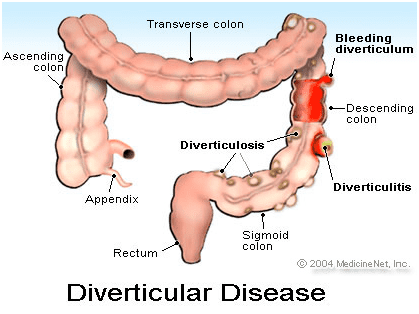 Infection can lead to complications, such as swelling or rupturing of the diverticula, abscesses, bowel blockage, or leaks through the bowel wall. If one of the pouches becomes infected and inflamed, bacteria may enter small tears in the surface of the bowel, leading to small abscesses. In rare cases, the infection spreads and breaks through the wall of the colon causing infection or abscesses in the abdominal cavity. Such infections are very serious and can be life threatening unless treated without delay. 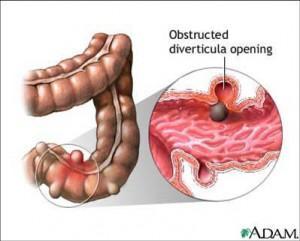 No one knows exactly what causes the sacs, or pouches of diverticulosis to form. Eating a low-fiber diet is one of the most likely causes. The disease was first noticed in the United States in the early 1900s, around the time processed foods were introduced into the American diet. Consumption of processed foods greatly reduced Americans’ fiber intake.

People, who eat mostly processed food, as many Americans eat, do not get enough fiber in their diet. Processed foods include white rice, white bread, most breakfast cereals, crackers, and pretzels.

Diverticular disease is common in developed or industrialized countries—particularly the United States, England, and Australia—where low-fiber diets are consumed. The disease is rare in Asia and Africa, where most people eat high-fiber diets. Fiber is the part of fruits, vegetables, and grains that the body cannot digest. Some fiber, called soluble fiber, dissolves easily in water. It takes on a soft, jelly-like texture in the intestines. Insoluble fiber passes almost unchanged through the intestines. Both kinds of fiber help prevent constipation by making stools soft and easy to pass. 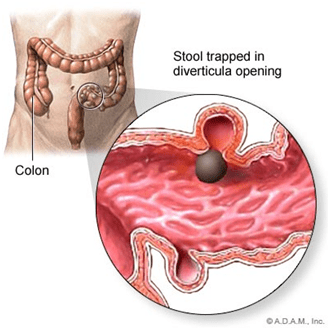 As a result, constipation and hard stools are more likely to occur – causing people to strain when passing stools. This increases the pressure in the colon or intestines and may cause these pouches to form.

Diverticulosis is very common. It is found in more than half of Americans over age 60. Only a small number of these people will develop diverticulitis.

Doctors are not certain what causes diverticula to become inflamed. The inflammation may begin when bacteria or stool are caught in the diverticula. An attack of diverticulitis can develop suddenly and without warning.

Most people with diverticulosis do not have any discomfort or symptoms, but they may have bloating and cramping in the lower part of the belly.

Symptoms of diverticulitis are more severe and often start suddenly, but they may become worse over a few days. The most common symptom of diverticulitis is abdominal pain. The most common sign is tenderness around the left side of the lower abdomen. If infection is the cause, fever, nausea, vomiting, chills, cramping, and constipation may occur as well. The severity of symptoms depends on the extent of the infection and complications.

A CT scan is generally the best test to diagnose diverticulitis. Diverticulosis is usually diagnosed on routine colonoscopy.

The treatment of diverticulitis depends on the severity of your symptoms. Some people may need to be hospitalized, but most patients can be treated at home with antibiotics.

Once these pouches have formed, you will have them for life. If you make a few simple changes in your lifestyle, you may not have diverticulitis again.

Surgery is required only when complications occur, attacks keep recurring, or when people have severe attacks with little response to medication. Surgery for diverticular disease can be performed by laparoscopic or minimally invasive techniques. Surgery involves removing part of the colon, usually the sigmoid colon, and reattaching it to the rectum. 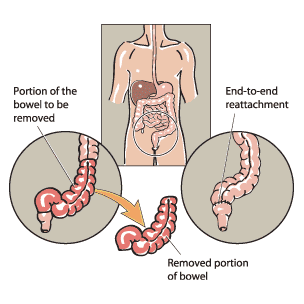 Immediate surgery may be necessary when the patient has other complications, such as perforation, a large abscess, peritonitis, complete intestinal obstruction, or severe bleeding. In these cases, two surgeries may be needed because it is not safe to rejoin the colon right away. During the first surgery, the surgeon cleans the infected abdominal cavity, removes the portion of the affected colon, and performs a temporary colostomy, creating an opening, or stoma, in the abdomen. Stool is collected in a pouch attached to the stoma. In the second surgery several months later, the surgeon rejoins the ends of the colon and closes the stoma.

Diverticulitis can lead to bleeding; infections; small tears, called perforations; or blockages in the colon. These complications always require treatment to prevent them from progressing and causing serious illness. 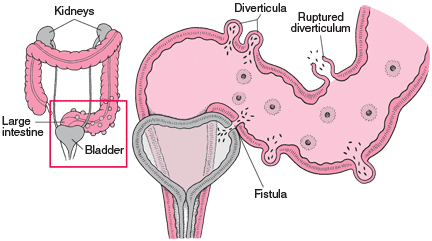 Rectal bleeding from diverticula is a rare complication. Doctors believe the bleeding is caused by a small blood vessel in a diverticulum that weakens and then bursts. When diverticula bleed, blood may appear in the toilet or in the stool. Bleeding can be severe, but it may stop by itself and not require treatment. A person who has bleeding from the rectum—even a small amount—should see a doctor right away. Often, colonoscopy is used to identify the site of bleeding and stop the bleeding. Sometimes the doctor injects dye into an artery—a procedure called angiography—to identify and treat diverticular bleeding. If the bleeding does not stop, surgery may be necessary to remove the involved portion of the colon.

Abscess, Perforation, and Peritonitis
Diverticulitis may lead to infection, which often clears up after a few days of treatment with antibiotics. If the infection gets worse, an abscess may form in the wall of the colon.

Fistula
A fistula is an abnormal connection of tissue between two organs or between an organ and the skin. When damage, infected tissue comes into contact with normal tissue during an infection, they sometimes stick together. If they heal that way, a fistula may form. When diverticulitis-related infection spreads outside the colon, the colon’s tissue may stick to nearby tissues. The organs usually involved are the bladder, small intestine, and skin.

The most common type of fistula occurs between the bladder and the colon. This type of fistula affects men more often than women. It can result in a severe, long-lasting infection of the urinary tract. The problem can be corrected with surgery to remove the fistula and the affected part of the colon.

A technique known as minimally invasive laparoscopic colon surgery or resection allows surgeons to perform many common colon procedures through small incisions. Depending on the type of procedure, patients may leave the hospital in a few days and return to normal activities more quickly than patients recovering from open surgery.