Colon/Rectal cancer is a disease in which malignant (cancer) cells form in the tissues of the colon. 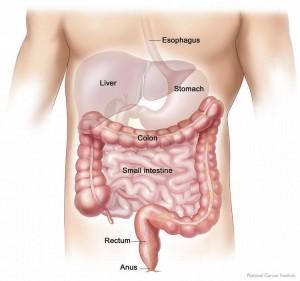 After colon cancer has been diagnosed, tests are done to find out if cancer cells have spread within the colon or to other parts of the body.

The process used to find out if cancer has spread within the colon or to other parts of the body is called staging. The information gathered from the staging process determines the stage of the disease. It is important to know the stage in order to plan treatment.

As colon cancer progresses from Stage 0 to Stage IV, the cancer cells grow through the layers of the colon wall and spread to lymph nodes and other organs.

Stage 0 (Carcinoma in Situ): In stage 0, the cancer is found only in the innermost lining of the colon. Stage 0 cancer is also called carcinoma in situ.

Stage 1: In stage I, the cancer has spread beyond the innermost tissue layer of the colon wall to the middle layers. Stage I colon cancer is sometimes called Dukes’ A colon cancer.

Stage III: In stage III, the cancer has spread from the innermost tissue layer of the colon wall to the middle layers and has spread to as many as 3 lymph nodes. Stage III colon cancer is sometimes called Dukes’ C colon cancer.

Stage IV: In stage IV, cancer may have spread to nearby lymph nodes and has spread to other parts of the body, such as the liver or lungs. Stage IV colon cancer is sometimes called Dukes’ D colon cancer.

Surgery (removing the cancer in an operation) is the most common treatment for all stages of colon cancer. Most of the time surgery can be performed laparoscopically (through small incisions).

Stage I Colon/Rectal Cancer is generally treated by laparoscopic surgical removal of the cancer.

Stage IV Colon or Rectal Cancer treatment is highly variable but generally consists of a combination of surgery, chemotherapy, and radiation therapy

Each year, more than 600,000 surgical procedures are performed in the United States to treat a number of colon diseases. Although surgery is not always a cure, it is often the best way to stop the spread of disease and alleviate pain and discomfort.

In most laparoscopic colon surgeries or resections, surgeons operate through 2 or 3 small openings (each about a quarter inch) while watching an enlarged image of the patient’s internal organs on a television monitor. In some cases, one of the small openings may be lengthened to 2 or 3 inches to complete the procedure.