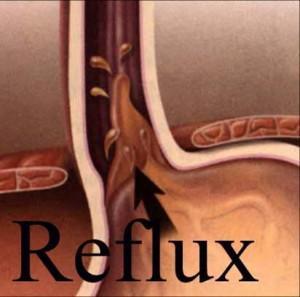 Although “heartburn” is often used to describe a variety of digestive problems, in medical terms, it is actually a symptom of gastroesophageal reflux disease. In this condition, stomach acids reflux or “back up” from the stomach into the esophagus. Heartburn is described as a harsh, burning sensation in the area in between your ribs or just below your neck. The feeling may radiate through the chest and into the throat and neck. Many adults in the United States experience this uncomfortable, burning sensation at least once a month. Other symptoms may also include vomiting, difficulty swallowing and chronic coughing or wheezing. 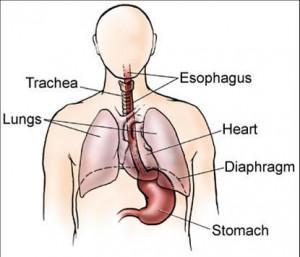 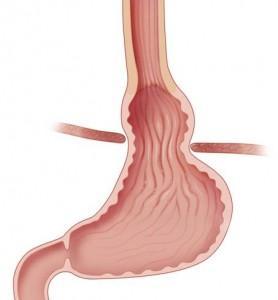 Some people are born with a naturally weak sphincter (LES). For others, however, fatty and spicy foods, certain types of medication, tight clothing, smoking, drinking alcohol, vigorous exercise or changes in body position (bending over or lying down) may cause the LES to relax, causing reflux.

A hiatal hernia (a common term for GERD) may be present in many patients who suffer from GERD, but may not cause symptoms of heartburn.

In many cases, changing diet and taking over-the-counter antacids can reduce how often and how harsh your symptoms are. Losing weight, reducing or eliminating smoking and alcohol consumption, and altering eating and sleeping patterns can also help.

If symptoms persist after these life style changes, medications may be required. Antacids neutralize stomach acids and over-the-counter medications reduce the amount of stomach acid produced. Both may be effective in relieving symptoms. Prescription drugs, such as Prevacid or Propulsid, may be more effective in healing irritation of the esophagus and relieving symptoms.

Patients who do not respond well to lifestyle changes or medications or those who continually require medications to control their symptoms, will have to live with their condition or may undergo a surgical procedure. Laparoscopic surgery is very effective in treating GERD. 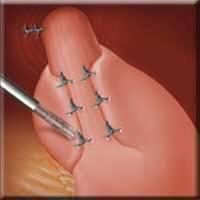 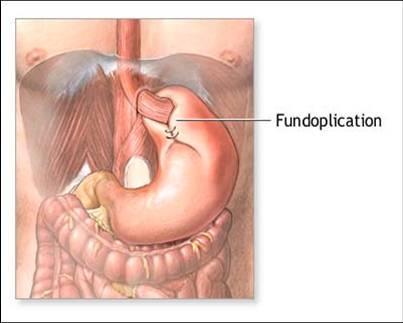 The operation for reflux generally takes approximately 2 hours and requires an overnight stay in the hospital. Most people leave the hospital the next day.

Patients generally return to work an average of 3 to 7 days after surgery, depending on their pain and level of discomfort.

A clear liquid diet will be required for approximately 3 to 5 days after surgery. Clear liquids consist of broth, flat soda, water, or juice. If after 3-5 days clear liquids are tolerated well, the diet will be advanced to a soft diet. A soft diet consists of foods that are easy to chew and swallow such as foods softened by cooking or mashing, canned or soft-cooked fruits and vegetables, or moist, tender meats, fish, and poultry . If a soft diet is tolerated for three weeks, then a regular diet will be begun.

It is common to get full quickly when eating and occasionally feel bloated after surgery. Some patients may have some dysphagia, or difficulty swallowing after surgery. These symptoms usually improve within a few weeks.

Laparoscopic Anti-Reflux Surgery is a  procedure with inherent risks. These risks are real but occur fairly infrequently (<1%). Some, but not all risks, are listed below: