Incisional hernias are hernias that occur anywhere in the abdomen wall in an area of a prior surgical incision (wound).

When a person has an incisional hernia, abdominal organs, most commonly the small intestine or omentum (a layer of abdominal fat that coats the abdominal cavity), may protrude through this hole and create a visible lump or bulge. A hernia of this type usually presents with a bulge at or near the area of the prior surgery (a surgical wound). Incisional hernias may cause discomfort or pain near or around the belly button, when abdominal contents get caught in the hole. Without surgical correction, there is also risk that some fat or part of the intestine will get stuck (incarcerated) in the hernia and become impossible to push back in. This is usually painful. If the blood supply to this area is cut off (strangulation), urgent surgery is needed.

These hernias can appear weeks, months, or even years later, and can vary in size from small to very large. Incisional hernias usually may result from 1) poor wound healing whether from infection, obesity, poor nutrition, or certain medications (most commonly steroids), and 2) repeated wear and tear to the surgical incision.

Incisional hernias can range in size from very small to large and complex and are often identifiable as a bulge or lump at or near the area of prior incision. Most any prior abdominal operation or incision can develop into an incisional hernia.

An incisional hernia can occur immediately following surgery or may not become apparent for months to years after the original surgical procedure.

Incisional hernias are generally the largest and most complicated of hernias.  Many of these, however, can be repaired laparoscopically.

If an incisional hernia develops, it should not be repaired by using the same techniques used at the original operation. In other words, if a hernia developed after a simple suture repair of the wound (closing the incision with a stitch or suture only), then the hernia should be closed another way.

Most commonly, these hernias are repaired with the use of mesh. The hole is not brought together with stitches but rather, covered by a strong surgical mesh.  The mesh is placed underneath the defect or hole (the hernia) in the abdominal wall. By placing the mesh so it reaches well beyond the edges of the entire hole, a stronger, more lasting repair is created. Thus, the mesh is placed without tension and leads to fewer recurrences. Prior to using the technique of mesh closure, the hernia was closed by sewing the edges of the hole (the hernia) together. This created a great deal of tension and led to many recurrences. 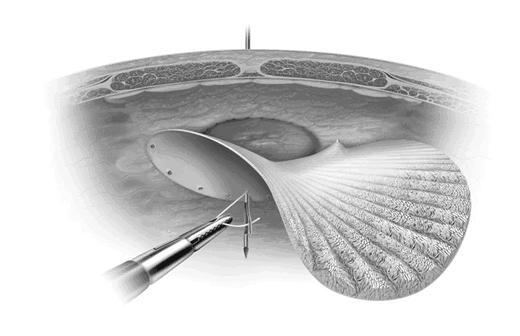 When a mesh is used, it can either be placed by one of two methods: laparosocpically or through an open incision. In the laparoscopic repair, the hernia is fixed through two or three small incisions using a video camera. In an open repair, the entire previous incision is opened.

A laparoscopic repair is the preferred method of repair by offering these advantages to an open repair:

The above video demonstrates the technique of laparoscopic repair of an incisional hernia. Initially, a video camera is inserted in between the layers of the abdominal wall in order to provide visualization of the surgery. To perform the surgery, two trocars (small tubes where surgical instruments are passed through) are first inserted. One of these is seen being placed in the beginning of the video. Next the hernia is found and the hernia defect is measured. The mesh is then placed in to the abdomen and opened.  It is placed to span the hernia defect. The mesh is then fixed into place by absorbable tacks, which are placed around the mesh circumference. At this point, the mesh is held in position and residual gas is removed.