Morbid Obesity Is A Disease


Obesity is emerging as a health epidemic around the world. According to the Centers for Disease Control and Prevention, obesity is rapidly spreading across all regions and demographic groups. An estimated 120 million adults in the United States are overweight or obese. That figure represents more than 50% of the American adult population. Of this group, 20 million adults suffer from severe obesity.

Obesity is a serious disease with symptoms that build slowly over an extended period of time. The National Institutes of Health (NIH) define morbid obesity as:

Obesity is a serious public health issue in the U.S. 24 million U.S. adults are living with morbid obesity. Obesity is an excess of total body fat, which results from the caloric intake that exceeds energy usage. A measurement used to assess health risks of obesity is Body Mass Index (BMI). BMI is calculated by dividing body weight (lbs.) by height in inches squared (in2) and multiplying that amount by 704.5. The metric calculation for BMI is kg/m2. 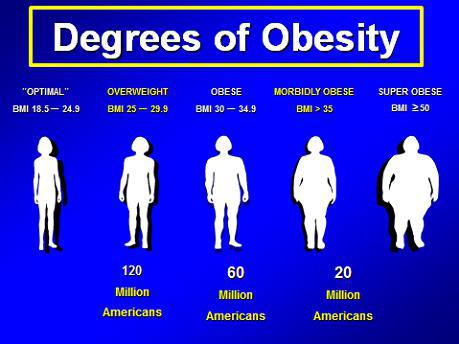 The American Obesity Association reports that obese individuals have a 50-100% increased risk of death as compared to normal weight individuals, with 300,000 to 587,000 deaths each year. This substantial increase in health risks has made obesity the second leading cause of preventable death in the United States.

What is morbid obesity?
A person who generally weighs at least twice or 100 pounds more than his or her ideal weight or has a BMI of 40 or more is diagnosed as morbidly obese. The disease of morbid obesity interferes with basic physical functions such as breathing or walking. Long-term effects of the disease include shorter life expectancy, serious health consequences in the form of weight-related health problems (co-morbid conditions) such as type 2 diabetes and heart disease, and a lower quality of life with fewer economic and social opportunities. The National Institutes of Health report that morbid obesity may considerably reduce life expectancy and is associated with an increased risk of developing conditions or diseases such as:

The presence of obesity increases the risk of a number of medical conditions, including cancer. A co-morbid condition is a health condition related to a primary disease such as obesity.

There are many health conditions related to morbid obesity, but some of the most common are:

The causes of morbid obesity are multiple and complex. Despite conventional wisdom, it is not simply a result of overeating. Research has shown that, in many cases, significant, underlying causes of morbid obesity are genetic, environmental, and social. Studies have demonstrated that, once the problem is established, efforts such as dieting and exercise programs have a limited ability to provide effective long-term relief.

Bariatric surgery clearly has the best weight loss outcome compared to the other two treatments—50 to 70 percent of people were able to lose at least 50 percent of the excess weight and keep it off for five years.

After five years, only 2 to 5 percent of the people who dieted and exercised had maintained a weight loss of at least 10 percent.

People who had taken weight loss medications were not able to maintain any weight loss.

Dieting, exercise, and medication have long been regarded as the conventional methods to achieve weight loss. Sometimes, these efforts are successful in the short term. However, for people who are morbidly obese, the results rarely last. For many, this can translate into what’s called the “yo-yo syndrome,” where patients continually gain and lose weight with the possibility of serious psychological and health consequences.

Recent research reveals that conventional methods of weight loss generally fail to produce permanent weight loss. Several studies have shown that patients on diets, exercise programs, or medication are able to lose approximately 10% of their body weight but tend to regain two-thirds of it within one year, and almost all of it within five years. Another study found that less than 5% of patients in weight loss programs were able to maintain their reduced weight after five years.

Over the years, weight loss surgery has proven to be a successful method for the treatment of morbid obesity. Surgical options have continued to evolve and Dr. Matthew Lublin is pleased to be able to offer patients Laparoscopic Adjustable Gastric Banding and the Gastric Sleeve. This procedure is the safest, least traumatic and only adjustable obesity surgery available in the United States.